The wines produced at the Clos Lapeyre are made from Petit and Gros Manseng grapes along with Courbu and Camaralet : a range of varieties to express the diverse terroir of the Lapeyre estate.

Five varieties are allowed to be used in the Jurançon appellation, but a large and important part of the specificity of our wines is of course linked to the Gros and Petit Manseng adapted to our soil and climate.
Even though it is two different varieties, both have a strong and communal story in the foothills of the Pyrenees because they were identified already at the end of the XVIII century, at the age when the Béarn was still made-up of states.

At the time, the more productive Gros Manseng was more cultivated, blended with Courbu. It gave young wines enjoyed young in all the auberges of the region. The Petit Manseng was reserved for the cuvées destined for bottling.

The Manseng grapes are late varieties from the third cycle (oldest) that come out very early, beginning of March and ripen very late: October, November … they therefore have a very long vegetative cycle.

The vines grow well and require high and resistant trellises against westerly winds (hence the number of stakes): The summer pickings turn the rows into wall-like wines that reach 2.40m to 2.50m high. The important work of tying the vine shoots will therefore allow the maximum leaf surface to be exposed to have maximum photosynthesis activity.

However, the yields remain low on our hillside vineyards due to the low densities (around 3000 vines / ha), but also the low juice ratio of our small-grained grapes: 1.5 kg to 1.7 kg of Gros Manseng are required to obtain 1 liter of juice, and between 2 and 3 kg of Petit Manseng against 1.3 kg for a normal grape.

We collected on average on the farm :

At Clos Lapeyre, today we have around 60% of Petit Manseng, the rest in Gros Manseng : the several thousand Courbu vines from the property are on the Vitatge Vielh (old vine in occitan) plot planted in the 45s. We recently replanted Courbus and Camaralets in mass selection. Between 1972 and 1975, 5 hectares were planted, including 3 in terraces: with those of Camin Larredya, the first terraces made in Jurançon. The upper part of the Lapeyre slope was replanted between 1982 and 1984.
The Navaillés and Poudempa plots in Gros Manseng and Petit Manseng respectively date from 1991 and 1993.
The magnificent Bish cirque all in terraces of Petit Manseng was set up between 1994 and 1998.
The terraces, which have made it possible to operate very steep slopes in safety, only have very low densities, up to 1000 or 1100 vines / ha when the slopes on the steep plots reach 6 to 8 m high! Over the years, we have found that major earthworks upset the different horizons of the soil and do not promote the establishment of roots in depth.

Today, thanks to the evolution of traction equipment, we are re-planting vineyards in the direction of the slope as in the past without prior earthwork: a narrow crawler tractor allows us to cultivate the vineyard of Mantoulan planted in high density (close to 6000 vines / ha) and to work on sloping vineyards in soggy soil conditions.
Our vineyard includes 7 islets of 1 to 6 ha: depending on the vintages and the harvest dates, we produce 5 to 8 different dry and sweet white wines, each with its own personality. 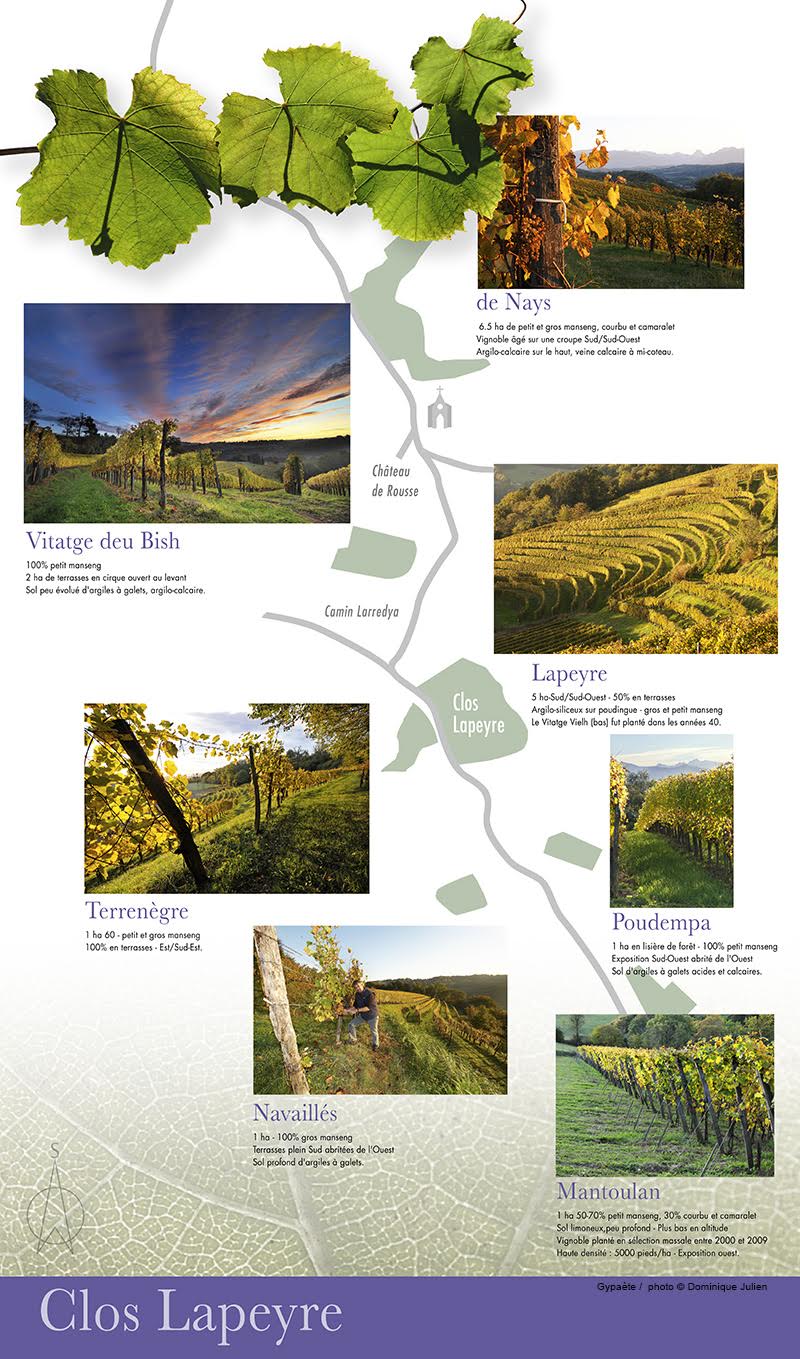